Perceptions of Americans on Foreign Affairs during the Trump Administration and Their Interests in the Korean Peninsula
2020-11-02 View : 306 KANG Miong Sei

Perceptions of Americans on Foreign Affairs during the Trump Administration

and Their Interests in the Korean Peninsula

❍ The four-year Trump administration was the most controversial period of time for both the U.S. and the international community. This “outsider” made several pledges during his presidential campaign, and most of them became a reality during his term. What the Trump administration intended was to put alternative values in place of traditional norms and values, which both sides of conservatives and progressives, of Republicans and Democrats had consented in the past. Trump has already vowed to retreat from the past stance of interventionism and to prioritize national interests of the U.S. during his election campaign, and he acted accordingly. Trump’s provocation raised controversies among the scholars of international political theory.1) Scholars of liberal international political theory argued that Trump’s decisions are in fact against national interests of the U.S. as they threaten the post-war international order that the U.S. constructed. Meanwhile, realist scholars claimed that Trump’s policies are in line with what Americans desire (Mearsheimer & Walt 2016; Schweller 2018).

- Second, Trump reviewed alliance policies in general, including NATO and its defense cost-sharing with South Korea and Japan.

- Third, Trump withdrew from the Paris Climate Accord in June 2017, which is considered one of three major achievements of the Obama administration.

❍ Now, three years has passed since the inauguration of President Trump. It is an apt time to analyze how Americans actually respond to Trump’s unilateralism and America-first policy. It is important to note that diplomacy in democratic society is ultimately limited by the wills of people (Shapiro 2018; Sutter 2019).

❍ Data used in this article for analyses and discussions of the perceptions of Americans on foreign affairs are from public opinion surveys conducted by the Chicago Council on Global Affairs (CCGA) from 1974 to 2019. The CCGA was founded after the end of the First World War as a nonpartisan organization for international affairs. It was named as Chicago Council on Foreign Affairs at the time, but it changed to the current title in 2006. In 2016, it was ranked the first place for a “Think Tank to Watch” by the “Global Go To Think Tank Index,” which Think Tanks and Civil Societies Program of the University of Pennsylvania release annually.

❍ Due to the economic depression, Americans are growing skeptical of politics and elites, and such skepticism led to distrust of overall policies. A great change in the U.S. economy is against the backdrop. The political consequences of such were the Trump administration’s America-first policies. This is again a new challenge to the U.S. foreign policy as general oppositions by experts—both conservatives and liberals—indicate.

❍ Does the election of Trump signify changes in the perceptions of Americans on foreign affairs? Americans have experienced several structural transitions due to the fall of the U.S. economy and military power, the rise of China, and the challenges posed by Russia. For example, the U.S. economy accounted for more than 39.5% of the world’s gross domestic product (GDP) in 1961 yet 24.3% in 2019. Meanwhile, China’s GDP share increased from 3.5% in 1961 to 16.3% in 2019.

□ Roles of the U.S. in Global Affairs

❍ Trump prioritized solving domestic issues and advocated America-first policies. He continued to emphasize national interests in a narrow sense after the inauguration and withdrew from the Paris Climate Accord, in which the Obama administration participated.

❍ For average Americans who cannot easily access information, the media serves a particularly important role. There were major debates around the effects of globalization before and after the election in 2016. The discussions may have affected the formation of public opinion.

Figure 1. Percentage of Positive Responses to the Question of “Is Globalization Good for the U.S. Economy?”

❍ A wide gap between perceptions on foreign affairs of average Americans and American elites opened the Trump era. The Obama administration’s elites adhered to the liberal international order that the post-war U.S. built and emphatically pushed for policies to continue traditional alliances and free trade (NAFTA, TPP). Meanwhile, Republican elites adhered to neo-conservatism. They pursued unilateral foreign policies, such as unilaterally intervening in the state-building process in the Middle East after 9/11 as an extension of the Cold War.

Figure 2. Perceptions of Free Trade and Alliance and Groups For and Against Trump 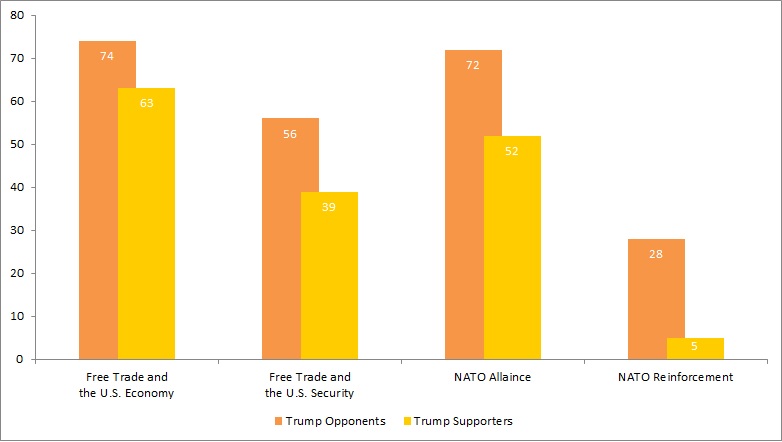 1)  For debates about the continuity of liberal international order since the Trump administration and changes in the U.S. foreign policies, please find the following link: https://networks.h-net.org/h-diplo.

※ This article is written based on the author’s personal opinions and does not reflect the views of the Sejong Institute.

Next
Perception of China on Current Regional Security Issues: Focusing on Perceptions and Opinions of Experts in China 2020.10.29