Electoral Impact of the COVID-19 Pandemic

On March 18, President Trump declared war on the coronavirus pandemic. Since then, 150,000 people have been killed. The total number of deaths exceeded 270,000 as of December 3, and the U.S. recorded 82 deaths per 100,000 people (NYT). The total death toll is 30 times that of the war in Iraq. According to a poll of 328,692 people over 3,025 counties in the U.S., there is a 2.5 percent gap between Biden and Trump’s approval rating as the number of deaths grows from the lowest to the highest level. For example, in Maricopa County, Arizona, the number of coronavirus deaths quadrupled over the past two months, and the gap between Biden and Trump’s approval rating increased by 0.6 percent. Political science literature says that voters punish incumbents for natural disasters on electoral resutls, including flood, plagues, and shark attacks.

Who is supporting Biden?

Both the Republican Party and the Democratic Party engaged in the biggest mobilization, and the 2020 presidential election recorded the highest voter turnout. The unprecedented pandemic was expected to have had a decisive impact on the candidate selection. How did the pandemic affect voter decisions in the 2020 U.S. presidential election? Traditional theories predicted against the reelection. History has shown that reelection is unlikely when events that cannot be controlled by incumbents, such as natural disasters, occur. As a typical example, President Hoover was not reelected in the 1932 election that was held during the Great Depression.

Normally, in other words if there were no pandemic, policy performance and party identity are the key factors. Conventionally, voting decisions can be explained with two mechanisms. Firstly, the retrospective voting theory suggests that voters vote after weighing the advantages and disadvantages of economic utility like consumers. Voters are in favor of reelection if the incumbent president has achieved good results in the economy or other sectors. Secondly or alternatively, social identity is central to how voters consider politics. Voters do not evaluate candidates by calculating their benefits, but simply vote based on social and psychological sentiments that have developed since childhood. Voters vote through a sense of party identity, which connects to one’s social identity. In other words, decisions are made after a confrontation between the Republican identity and the Democratic identity.

Biden and Trump’s fate in the U.S. presidential election was likely determined by three factors, including the coronavirus pandemic factor. Polls by Voter Study Group provided resources for a comprehensive review of these three factors. They are the fruits of the Democracy Fund and the UCLA NationScape Project. The project was conducted from March 13 to June 25, 2020 via 15 Internet surveys, which included numerous questions related to the coronavirus. This data helps to identify the effects of the COVID-19 pandemic on candidate selection. However, Figure 1 is a simple correlation. There were some significant factors besides the coronavirus that affected candidate selection. The complex relationship of the factors that influenced candidate selection is shown in Figure 2. Figure 2 shows how natural disasters, policies, and identities contributed to Biden’s victory after controlling demographic factors such as age, generation, gender, and education level. The supporting parties (Republican Party, Democratic Party, and Independent) represent a sense of party identification. Evaluation of economic policies, evaluation of President Trump’s state affairs, ideology, the imposition of tariffs on China, and immigrant tradition represent policy evaluation. Concerns over the coronavirus and the COVID-19 patients in workplace indicate the influence of natural disasters. Figure 2 only shows statistically significant variables at the 5 percent level. The factors located to the right of the dotted, vertical line that crosses 1 on the horizontal axis represent the support for Biden; the factors located to the left of the line represent the support for Trump. Education level, age, generation, and income level did not affect candidate selection. As shown in Figure 2, the correlation between concerns about the coronavirus and candidate selection in Figure 1 loses its influence when several other factors are controlled. 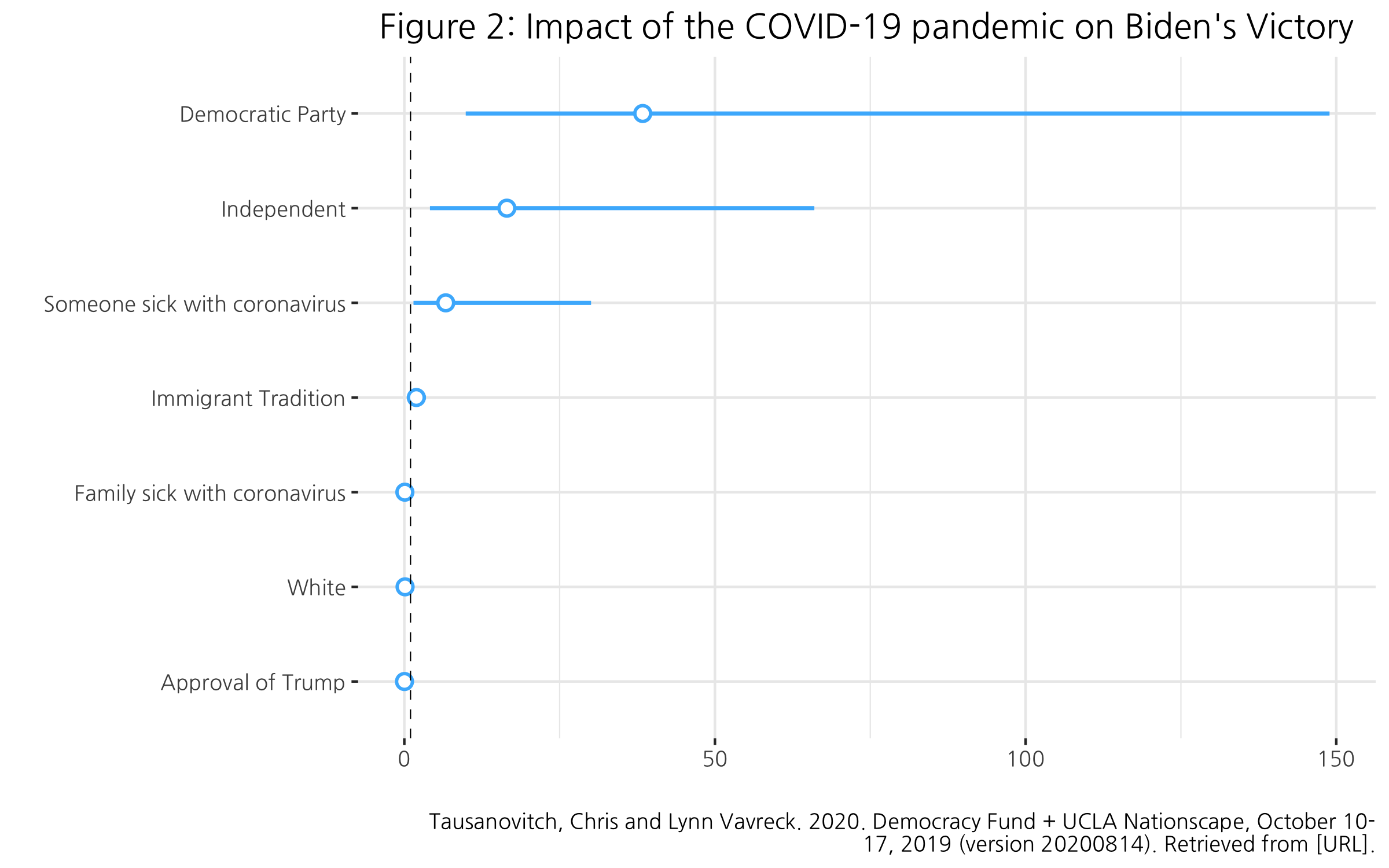 Identification with the Democratic Party and the pandemic effect

First, voters’ identification with the Democratic Party led to strong support for Biden. Respondents who identified themselves with the Democratic Party were about 38 times more supportive than those who identified themselves with the Republican Party. However, Democratic effect was compromised by respondents who identified with the Republican Party. Second, politically moderate Americans supported Biden about 16 times more than those who identified themselves with the Republican Party. Third, the pandemic effect was powerful. Those who saw a co-worker contracted with the coronavirus supported Biden 6.6 times more than those who did not. Facing the coronavirus infection in real life could have led to opposition to Trump’s measures of controlling the virus. Also, infected patients’ families supported Biden 9 percent more that those without such experience. This was an unexpected result; more discussion is needed in the future. Republican or Trump supporters who were contracted the COVID-19 could be responsible for the results.

After all, political identity was the most decisive factor in Biden’s victory over Trump. Supporters of the Democratic Party and centrists unconditionally supported Biden than supporters of the Republican Party. For the second most decisive factor, Trump’s measures against the coronavirus failed to meet expectations and worked in Biden’s favor. This is reflected in the experience of witnessing coronavirus infection at work. Those who saw a co-worker contracted with the coronavirus supported Biden rather than Trump. Now, the Biden administration must repay the support for victory by bringing all capabilities to overcome the pandemic.

※ This article is written based on the author’s personal opinions and does not reflect the views of the Sejong Institute.

Next
Extreme Confrontation between China and Australia: Implications for South Korea 2020.12.14